Orange, CA - 10/3/17 - Altemp Alloys, Inc., a stocking distributor of exotic and high temperature alloys, announces it has been certified for AS9100D.

"Altemp Alloys, Inc. is proud to announce our certification to AS9100D on September 18, 2017. Altemp has been serving the aerospace, defense and power generation industries for over 38 years," said Connie Mayhill, President and Owner at Altemps Alloys, Inc.

The update of AS9100 from revision C to D includes the full text of ISO 9001:2015. In addition to aligning the structure of the aerospace, defense and power generation requirements to the new structure of AS9100 2016 Rev D and ISO 9001:2015, the following key changes were implemented:

Altemp Alloys, Inc. is a complete source for your alloy requirements. It is a woman-owned small business and stocking distributor of exotic and high-temperature alloys. Altemp Alloys, Inc. has proudly served the aerospace, defense and power generation industries since 1979. Our 24,000 sp. ft. building in the heart of Orange County, California. This allows easy access to major freeways, airports, and seaports. In addition to alloys distribution, other services include waterjet cutting, machining, heat treatment, non-destructive examination and metallurgical support. 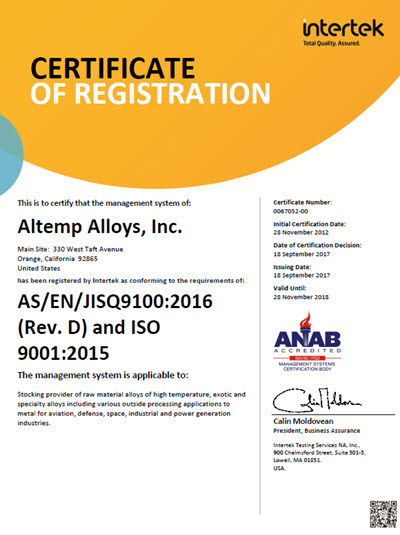